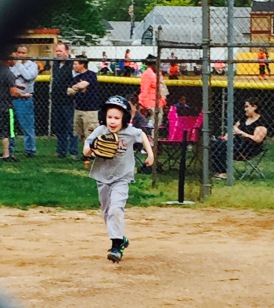 Despite feeling lousy most of the day, Justin pushed his bruised spine and tired body, rising to the challenge when his biggest wish was finally granted. Michael’s baseball coach invited Justin to join the team for last night’s game. Justin was able to play the entire game and did not strike out once. My heart soared over every smile and high-five. This was twenty-four hours after a spinal tap and chemotherapy. Over water ice, our family rejoiced in this victory together.

Twelve hours later, Justin was slumped in my arms at clinic. Tired, moody and receiving more chemotherapy, he was comforted by me staying close even though I found it difficult to muster a smile.

Why wouldn’t I still be floating on cloud nine only hours after answered prayer and Justin’s triumph over physical limitations? Because I have quickly learned that every time we take one step forward, we take two steps back. Because this journey is bigger than momentary joy over school plays and baseball games. This is about fighting for my son’s life and battling an enemy who desperately wants to wear me down until my faith is tattered and frail and unable to stand up against fierce currents.

And this is why I keep writing. To proclaim that my faith stands. Yes, I am weary and changed and battle-scarred and often discouraged and addicted to junk food and probably a little more serious than before. But my feet are firmly planted on the rock whom is Jesus, and in each step God grants and directs by His grace. I will not be moved. And this is NOT my own will or doing. My unbending faith is a gift from God and what an amazing gift! (Ephesians 2:8-9)

The rising and falling of this journey is exhausting. Especially when both happen in the span of five minutes. We rise and we fall, but God remains faithfully the same. (Hebrews 13:8)

I will continue to “press on toward the goal” even if I have to crawl to get there. One thing this journey affords, that I am letting go more and more of this world and truly beginning to understand and claim these words as my own: (Philippians 3:7-14)

But whatever were gains to me I now consider loss for the sake of Christ. What is more, I consider everything a loss because of the surpassing worth of knowing Christ Jesus my Lord, for whose sake I have lost all things. I consider them garbage, that I may gain Christ and be found in him, not having a righteousness of my own that comes from the law, but that which is through faith in Christ—the righteousness that comes from God on the basis of faith. I want to know Christ—yes, to know the power of his resurrection and participation in his sufferings, becoming like him in his death, and so, somehow, attaining to the resurrection from the dead. Not that I have already obtained all this, or have already arrived at my goal, but I press on to take hold of that for which Christ Jesus took hold of me. Brothers and sisters, I do not consider myself yet to have taken hold of it. But one thing I do: Forgetting what is behind and straining toward what is ahead, I press on toward the goal to win the prize for which God has called me heavenward in Christ.

I dedicate this post to my warrior friends, Drew Franklin and his wife, Melissa, whose testimony of faith in God’s sovereign plan has been both amazing and humbling. I’m asking you, my readers, to call out in prayer tonight on Drew’s behalf. The next forty-eight hours is a critical time in his battle with cancer. Drew and Melissa, press on in the grace of our Lord as you have already so faithfully and beautifully done. I love you both.

Grace be with you, my friends.

One thought on “We Rise and We Fall”