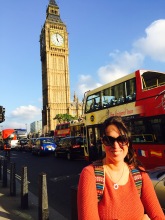 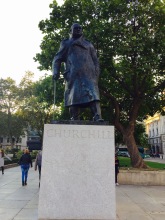 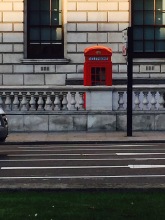 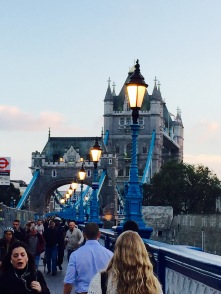 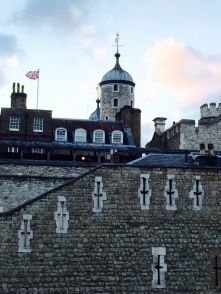 From left to right: 1. Me and Big Ben 2. Statue of Winston Churchill in Parliament Square 3. Infamous British phone booth 4. London Tower 5. Justin gets his hot dog (Me too…yum. I also bought caramel peanuts, being cooked right on the street. Also yum. And I really fancied the part when the vendor accepted my two pounds with a “Thank ya, love.”) 6. Walking across Tower Bridge 7. Side of London Tower, the “crosses” are spaces to shoot arrows (Jeff shared this bit of trivia but I haven’t fact checked him yet) 8. Sun setting over Thames River 9. Closer to a tower on Tower Bridge 10. Me and Jus pose for a pic on the bridge 11.  Justin is becoming a pro at riding “the tube” (two proper British gentleman gave up their seats for me and Jus. Jeff and I noted that wouldn’t happen in Philly)

I made a new friend. An obviously anxious, but very kind fellow. We shared a “table” with him so naturally I offered him a piece of my Trident bubble gum as I passed it out to Jeff and Justin.

“Is that an American sweet then?” he asked. Think heavy British accent.

With a nervous laugh and a sort of shocked expression, he refused. I might as well have offered him a dead roach to chew on.

“My sister went to America once and brought back all this American candy. Oh my. It was…oh my,” he said with bulgy eyes.

“Where in America are you from then?”

“Oh. Right. The capital then.”

“Brilliant.” He chatted on, nervously stringing thoughts together. “England is pretty flat. We don’t have all those hills like America. Like Hollywood. Oh…um…do you fancy Donald Trump or Hilary Clinton?”

This guy was a riot. “Neither.” I changed the subject. “It’s so nice you’re talking with us. People don’t readily do that so much where we live.”

“I think in America you really have to watch your back.”

Hilarious. But this time I bit my lip because I could see he was dead serious and actually not entirely wrong.

“Can I take a video of you talking? You’re just so…British. Will you say hello to my boys back in the states?”

My new friend sat up straight and allowed me to record him speaking, even calling us “lovely” and wishing us the best time in London. Fancy that.